Welcome to the AzerothCore Docker guide!

Installing AzerothCore using Docker is a simplified procedure that has several benefits:

The only requirements are git and Docker.

Before going further, make sure you have docker and docker compose installed in your system by typing in a terminal:

You should see a similar output:

Note for Windows users: you can use git-bash (the shell included in git) as a terminal.

You need to clone the AzerothCore repository (or use your own fork):

Now go into the main directory using cd azerothcore-wotlk. All commands will have to be run inside this folder.

Inside your terminal (if you use Windows, use git bash), run the following commands inside the azerothcore-wotlk folder

It will build docker images and compile the core automatically! This may take a while. Meanwhile you can go and drink a glass of wine

NOTE For dev: if you are working with code and you need a fast way to compile your binaries, the command above can be a bit overkill for you because you probably do not need to rebuild images. Therefore, we suggest to use one of the following solution instead:

IMPORTANT: This command should be executed only at the first installation and when there's a new version of the client-data available

Congratulations! Now you have an up and running azerothcore server! Continue to the next step to create an account

If you need to run this in background, you can use the following command to run the docker compose detached mode:

Open a new terminal and run the following command

find the name of worldserver

and then attach the worldserver. E.g.

If you got error message the input device is not a TTY. If you are using mintty, try prefixing the command with 'winpty'

This command will automatically attach your terminal to the worldserver console. Now you can run the account create <user> <password> command to create your first in-game account.

IMPORTANT: To detach: press ctr+p and ctrl+q. Do NOT try to detach using ctrl+c or you will kill your worldserver process!

To access your MySQL database we recommend clients like HeidiSQL (for Windows/Linux+Wine) or SequelPro (for macOS). Use root as user and 127.0.0.1 as default host. The default password of the root DB user will be password.

Unless your server installation is on the same network as your client, you might want to update the realmlist address in the acore_auth database with your server public IP address :

How to keep your AzerothCore updated with the latest changes

First of all, you just need to use the git tool to update your repository by running the following common command:

git pull origin master : this will download latest commits from the azerothcore repository

Then you can just run the following command:

NOTE: We do not update so often the client data, but when it happens you can run the following command:

./acore.sh docker client-data: it will download the new version of the client data if there's a new version available

How to run the worldserver with GDB

Running the server with GDB allows you to generate a crashdump if the server crashes. The crashdump file is useful for developers to understand which lines are failing and possibly fix it.

Keep in mind that you should compile your code with one of the following compilation types: Debug or RelWithDebInfo, otherwise GDB won't work properly

To enable GDB the steps are the following:

If the server crashes, you will find the crashdump file (gdb.txt) within the /env/docker folder

How to use the dev-container

Within our docker compose you can find the ac-dev-server service This service is used for our build and db operations, but it can also be used by you to develop with the VSCode Remote Docker extension

A dev-container lets you use a Docker container as a full-featured development environment. The .devcontainer folder in our project contains files to tell VS Code how to access (or create) a development container with all the needed tools. This container will run the AzerothCore with all the software and the configurations needed for working with our codebase and debugging the server.

Inside the azerothcore repo there's a pre-configured devcontainer.json that can be opened by using the VSCode command palette. To setup the Dev-Container follow these steps:

IMPORTANT: The dev-container also contains a pre-configured debugger action that allows you to use breakpoints and debug your worldserver.

How to debug your code with the dev-container

NOTE: Keep in mind that you should compile your code with the Debug mode, otherwise the debugger won't work properly

Once inside the VSCode dev-container you can go to the debug session and use the Linux/Docker debug action as you can see in this image: 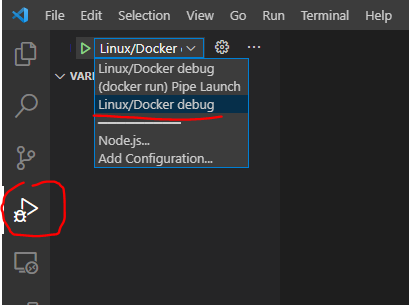 It will run a worldserver in debug mode and then you can start placing breakpoints in your code to debug it.

How to create a second realm with docker compose

To create a second realm we suggest you to take a look at the example available within the http://github.com/azerothcore/acore-docker repository.

To add a module simply place the module directory inside of the /azerothcore-wotlk/modules directory.

After adding a module you'll have to rebuild azerothcore:

After rebuilding you can (re)start the containers again.

Where are the etc and logs folders of my server?

How can I change the docker containers configuration?

You can copy the file /conf/dist/.env.docker to .env and place it in the root folder of the project, then edit it according to your needs.

In the .env file you can configure:

You can check all the configurations available in the docker-compose.yml file

Then your docker compose up will automatically locate the .env with your custom settings.

How can I start, stop, create and destroy my containers?

How to deal with the permission issues

[Linux] You must run docker without sudo

It's very important to run Docker without using sudo or the root user when possible. To do that you must setup your current user to be part of the docker group. Please, follow the official guide to configure it: Post-installation steps for Linux

[Linux] the containers are running as root

For simplicity, we run all the containers of the azerothcore-wotlk repo as root user to avoid permission issues while running them. However, it means that you need to reset the user permissions of the files created by the containers on your host, you can easily do it by running this command

If you want to run your containers with a different user instead, you need to create an .env file in the root directory and set the following variables:

How can I delete my database files?

Warning Once you've deleted your database files they are unrecoverable unless you have a backup.

To remove your database files you firstly want to make sure that your containers have been stopped and removed by typing: docker compose down.

After stopping and removing your containers you can proceed to remove the volume by typing: docker volume rm azerothcore-wotlk_ac-database

Note If you've changed your folder name from the default azerothcore-wotlk the volume name will be slightly different. To find the new volume name you can use the command docker volume ls. The volume should be labelled something along the lines of xxxx_ac-database.

NOTE: If you are not experimenting any particular issues with I/O performance, we suggest to NOT use this configuration

The osxfs and the NTFS are well known to have performance limitations with docker binded volumes, we optimized the docker compose by using volumes and the "delegated/cached" strategy when possible, but that's not enough for some configurations.

The total amount of RAM when running all AzerothCore docker containers is less than 2 GB with no players online.

This is an example of a fresh, empty AzerothCore server running with Docker on macOS:

When used on GNU/Linux system, the amount of memory used by Docker is even less.

Using Docker will have the same benefits as using virtual machines, but with much less overhead: 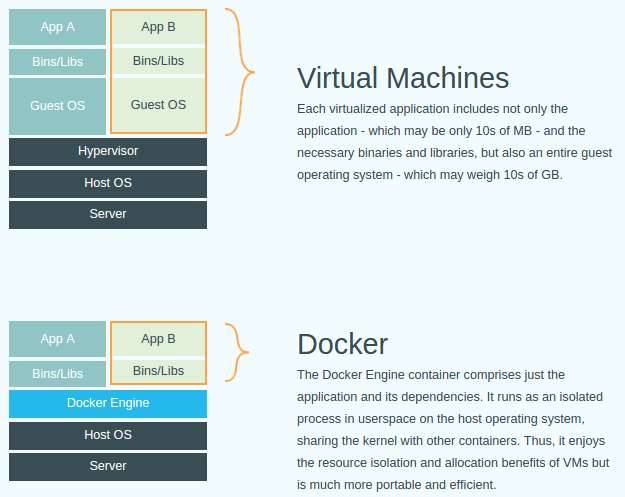 AzerothCore running on macOS with Docker

AzerothCore running on Windows 10 with Docker 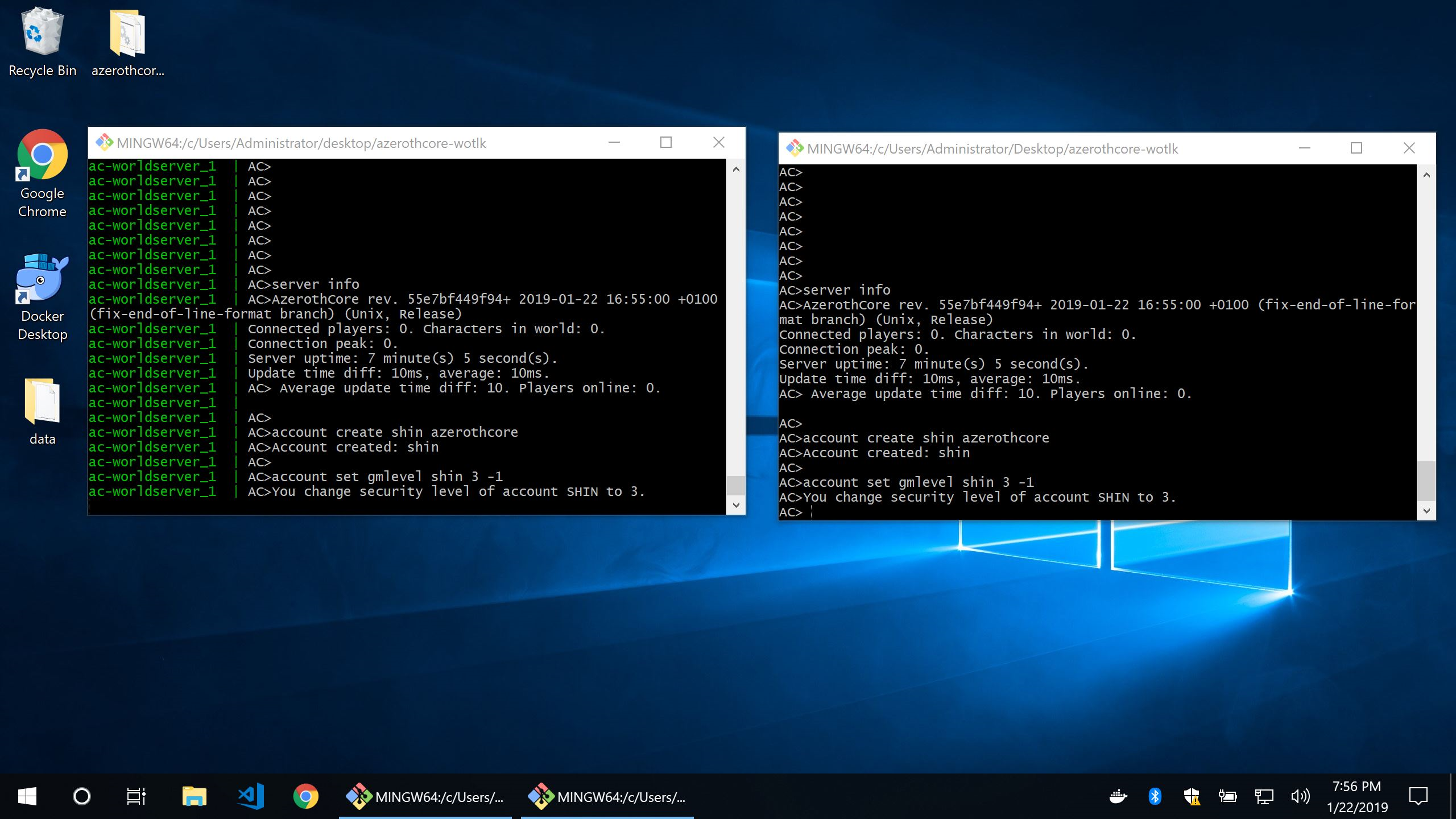 For server administrators, we recommend to read the Docker documentation as well as the Docker Compose reference.

If you want to be an administrator of an AzerothCore production server, it helps if you master the basics of Docker usage.

Feel free to ask questions on StackOverflow and link them in the #support-docker channel of our Discord chat. We will be happy to help you!